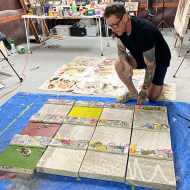 This user has not added any information to their profile yet.

Daniel grew up in the Eastern-townships, Quebec, he graduated early from Champlain college with a degree in art and design. He later received his BFA from NSCAD University, in Halifax, NS, in 2005. Between children and an art career, he completed a graduate degree in VFX for film and television in 2008. He currently divides his time working in the film industry as a concept artist, a professor at Max the mutt college and developing his studio practice.

Daniels paintings deal with the coexistence of nature and the urban environment, including the loss of habitat for wildlife. The mixed media of the paintings include mosses, dried flowers, stones and cement bits covered with graffiti, continuing the conversation between nature and urban issues.